Oh my goodness! Yesterday was great.

Started the morning off with a little walk down to the beach (just me... not Joey, he was snoozing and it was 5:45am)
I have some pictures of the beach, but I have limited time right now and I don't know how to find the SD card on the computer. I'll post more later.
Also, I have to remember to take a picture of what it looks like here. If you've been to SE Asia, you probably have a good idea of what it's like... think HCMC mixed with Khaosan road in Bangkok and the partying of Phi Phi. If you haven't been to SE Asia then you need to see my pics that will come in forthcoming posts.

Getting back to the room, Joey was just waking up. He wakes up now by standing in his crib quietly. When I walked in I had just heard a little 'click' and it was him rustling with his pack 'n' play, ready for the day.
I fed him out on the balcony and let Stuart catch up on some sleep.  Then Joey and I came downstairs and I chatted with some new friends from Australia. A married couple, Annette and Kevin.  Lots of people from Australia come to Bali because the flight is little over two hours away and the weather is much nicer this time of year. In some parts of Australia it's freezing and snowing right now. Their summer is our winter and vice versa.

Had a great chat with them and found out their Christians.  They told me some awesome stories of their time as missionaries in Papua New Guinea and some inspiring moments they've experienced in their Christian walk.  Kevin even took Joey for a little walk and play while I ate some breakfast, which was an added bonus!

Stuart came down and ate breakfast after about an hour, which was fine by me because Joey and I were having such a nice morning!

Went back to the room and got organized for our morning beach outing. I think we're getting this routine down pat after 2 days.

The walk down to the beach was getting warm.  When we made our way down we bought our chairs/umbrellas for the next couple of hours (30,000 IDR. Equivalent to about 2.75 USD)  We could have sat in the sand, but the cushion chairs and the shade are great for Joey once he wakes up from his morning nap in the stroller.

I think we've been doing a pretty good job of keeping the sun away from Joey.  Whenever we take the stroller out, I cover it with a sarong so the sunlight doesn't get in, and we've been using SPF 60 for babies all over him before we leave the house.  He seems to be doing great so far. Also, we don't go out at all in the heat of the day.  How we avoid this (or at least, have so far): the outdoor pool at our hotel is totally shaded and Joey loves it!

Had a little relax at the beach while Joey napped.  He barely napped though in the morning, so Stuart and I played with him for a while after that and then took him home because we felt it was getting a little too warm.

Back at the hotel we were feeling a little sweaty, so we put Joey into his swim diaper and went for a long swim with him in the pool. It was so sweet and he was happy the whole time!

He had a nice long snooze after that and the minute he went down I went foraging for food and found an awesome warung (street stall) to buy some mie goreng (noodles/vegetables/chicken).  It was the cheapest I've seen it since we arrived, and for 45, 000 IDR (about 4 USD) I got two servings and lots of steamed vegetables and rice.  I watched the pregnant woman and her mom cooking and it was a nice picture to see.

Stuart and I ate and then I went for a long walk on the beach. (Something Stuart and I can't do with Joey because it's hard to push the stroller on the beach and we can't put him in the carrier on the beach because of lack of shade).
It was super nice until I got lost going back on the main road and was misinformed which way to go by a local.... I should've expected as much with the language barrier. But, eventually I found my way back to my two boys who were happily playing out on the second floor hotel deck.

We played in the room for a long time because it seemed Joey was getting a bit of a cold and I figured we should slow down a little and take it easy with some AC for longer.

A couple of hours later we ventured out to Seminyak. We're in Kuta and Seminyak is a few km away.  It's next to impossible to get Joey to be happy (and safe) in a taxi, as they don't have seat belts and he can't sit in a car seat.  So, we decided to walk.

It was a good thing we did, because Joey fell asleep on the way!

Stuart and I had an amazing time, just the two of us at a beachside restaurant sitting out on cloth bean bag chairs with a small wooden table and a candle in front of us, with strawberry smoothies in hand watching natures show.  On the screen tonight: the most beautiful sunset I've ever seen.  An Indonesian guy played guitar softly in the background and sang some popular 'western' songs.  It was a perfect evening.

Joey woke up just as we were leaving the second restaurant we went to (because it looked like they had dessert) and I carried him all the way home while he looked excitedly at all the lights and motorbikes and locals cooed over him, blowing kisses and giving high fives, yelling 'Hi, Baby!!!' as we walked by. Some stopped to hold him (a regular occurance!).  The locals absolutely LOVE Joey because he's the only white baby around here! A lot of them even know him by name and yell out 'Hi, Joey!' It's so fun. Everywhere we go, we get stopped every few steps by a curious local wanting to pinch his cheeks.

When we got home we all showered (including Mr. Joey). I fed him, and he promptly fell asleep.
I quickly stepped out to get Stuart and I some Magnum Bars from the convenience store beside us (everyone does it!) and we watched (don't judge) Battlestar Galactica. That's right. Stuart finally convinced me. And even though I only lasted about 1/2 hour of the 1.5 hour episode before my eyes began to close, I really was enjoying it... but was so tired!

A couple pictures of the locals loving Joey 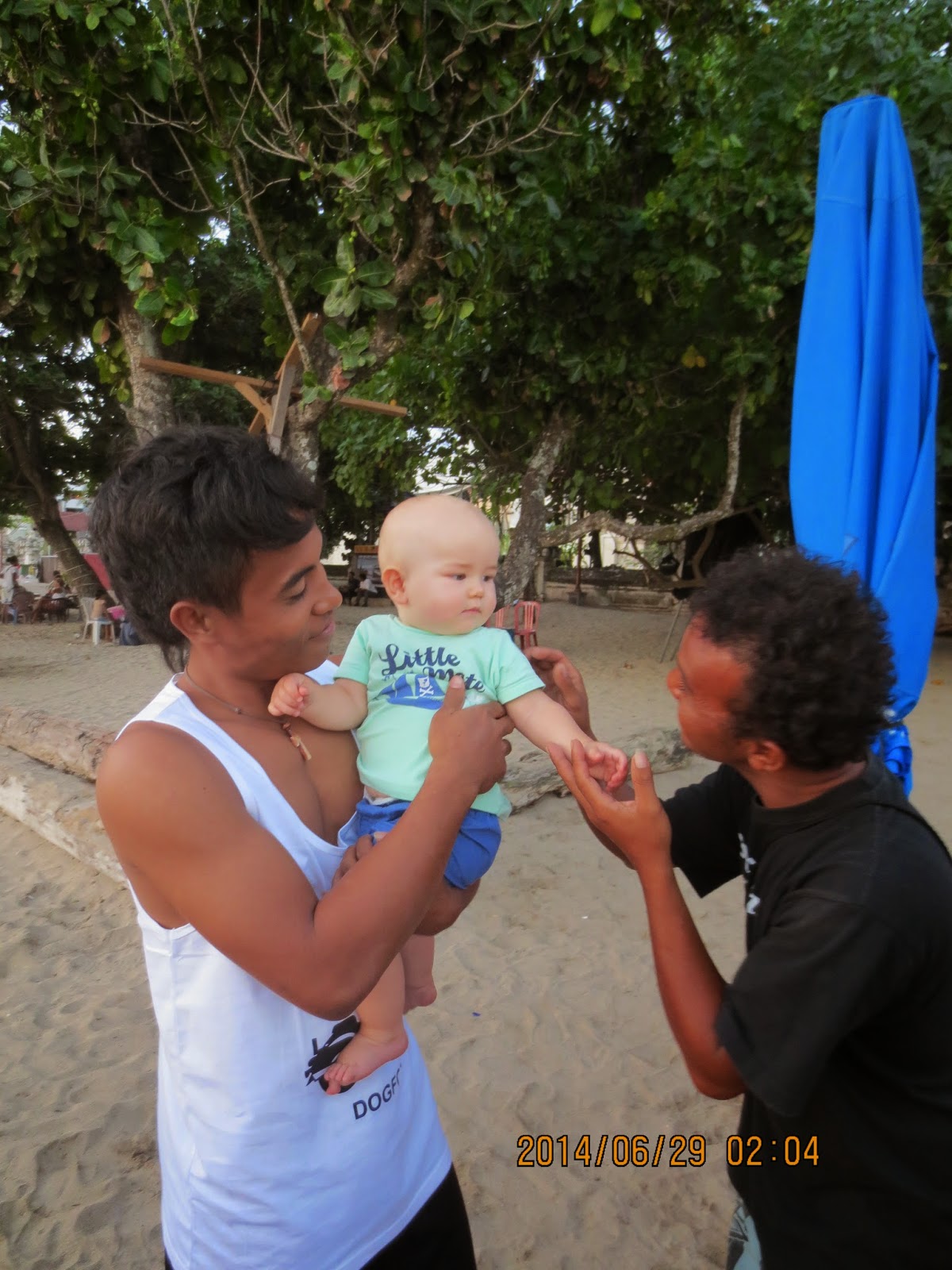 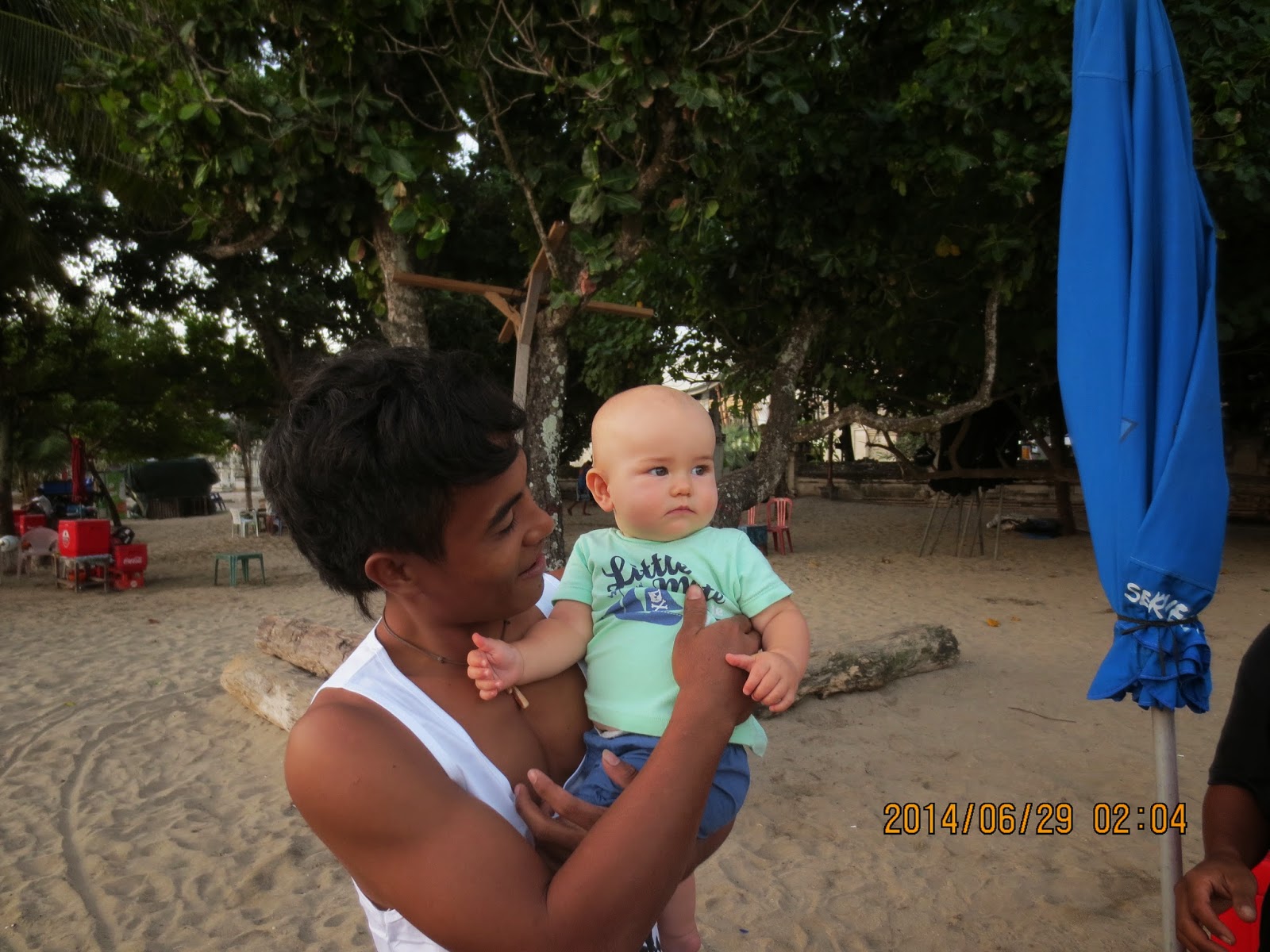 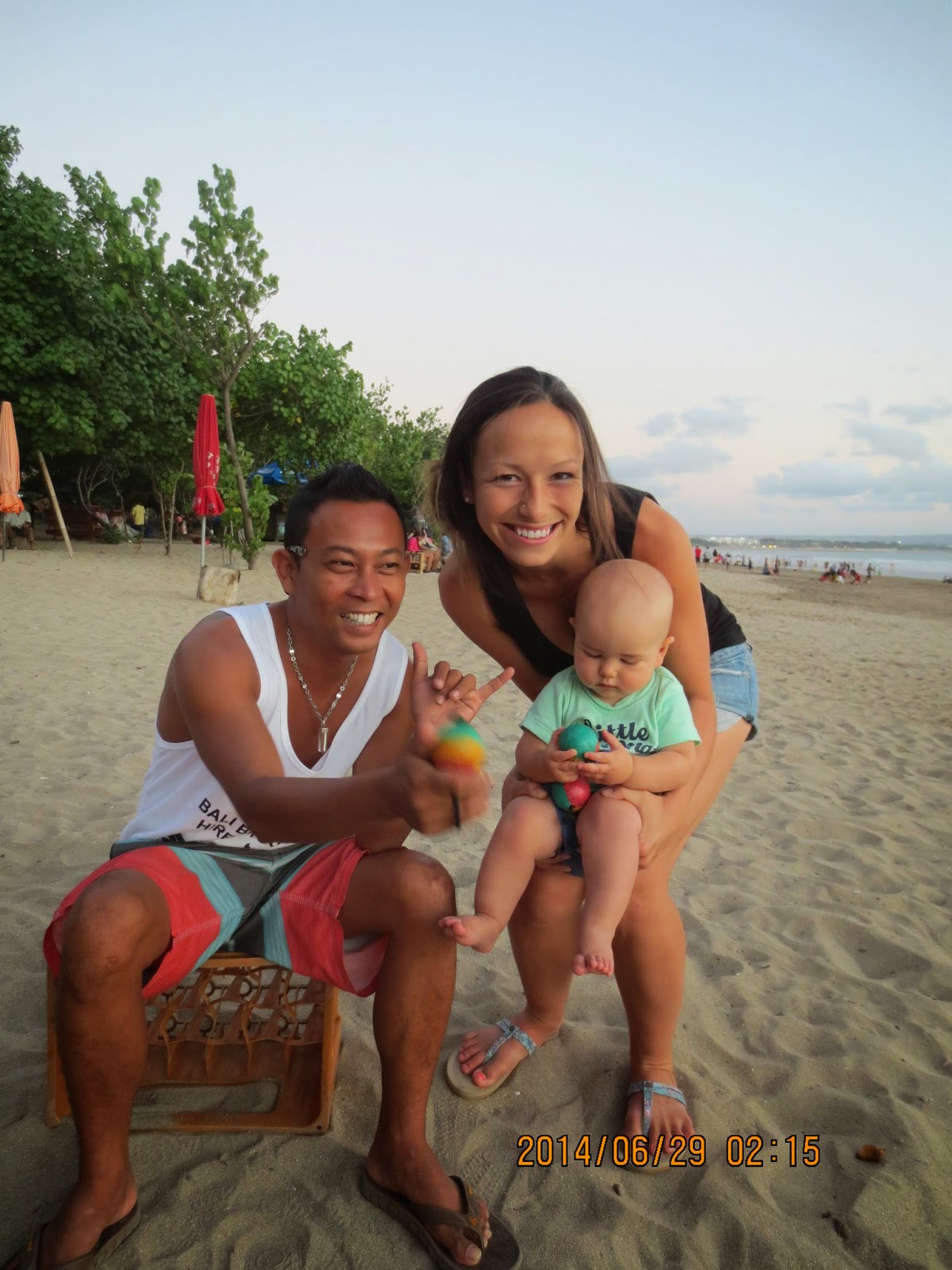 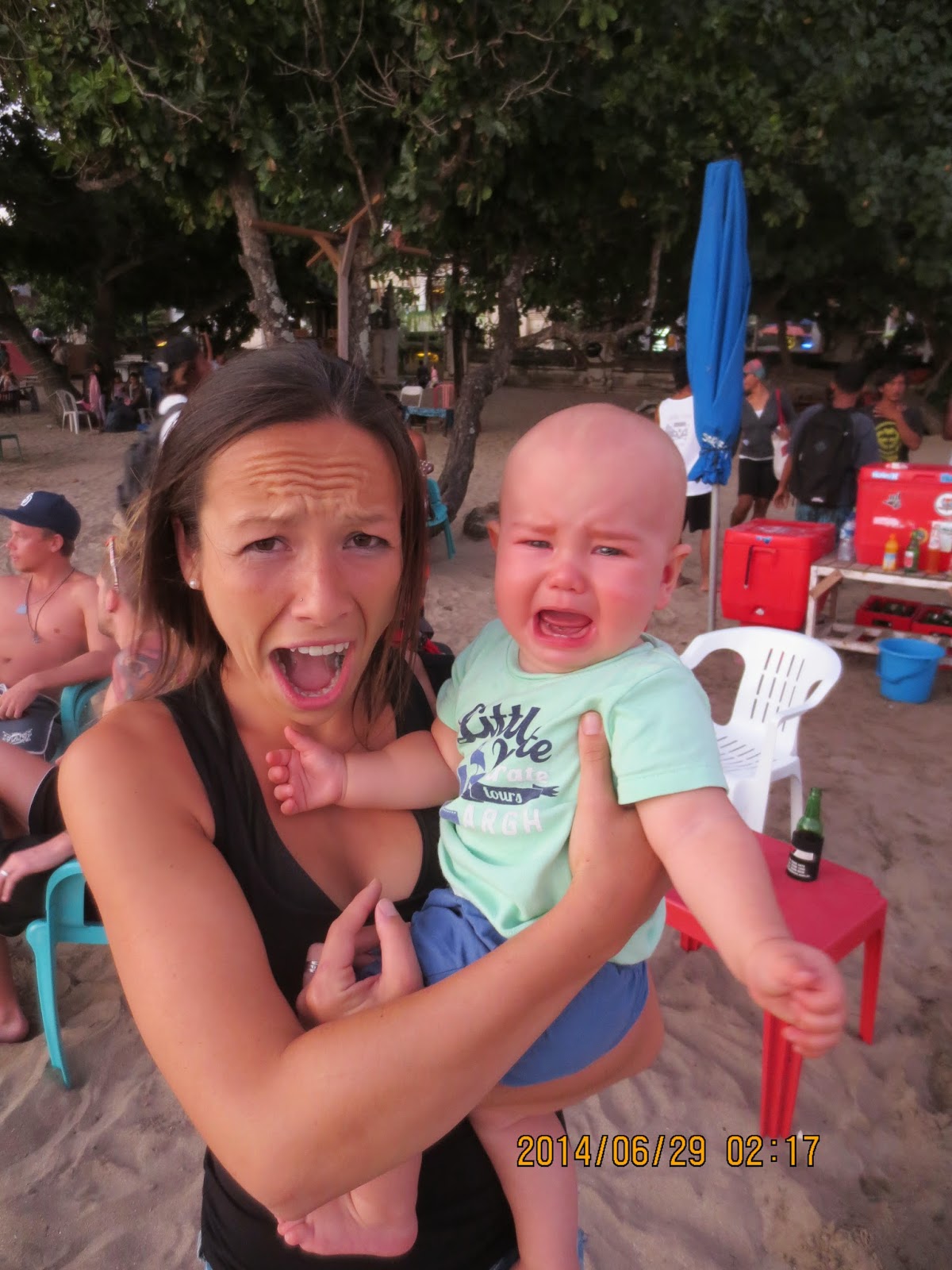 The last picture is Joey crying after we took the toy from the 2nd picture away from him. The dude in the second picture told us that when we come back to that part of the beach (probably tonight) that he'll give Joey one of those toys, but a dye free one. I think they're little coconuts smoothed and pained on a string. Never before has Joey been so sad to have a toy taken away. What a tragedy!

Time in the pool: 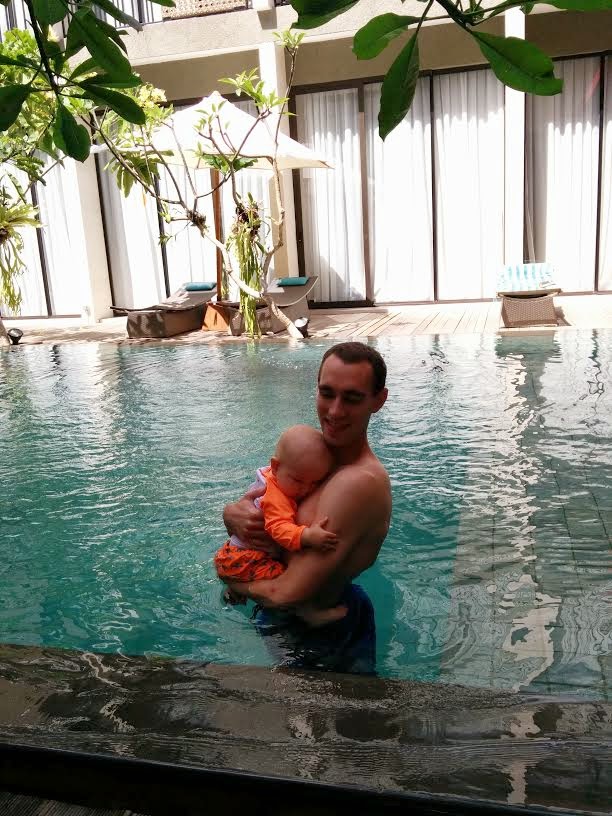 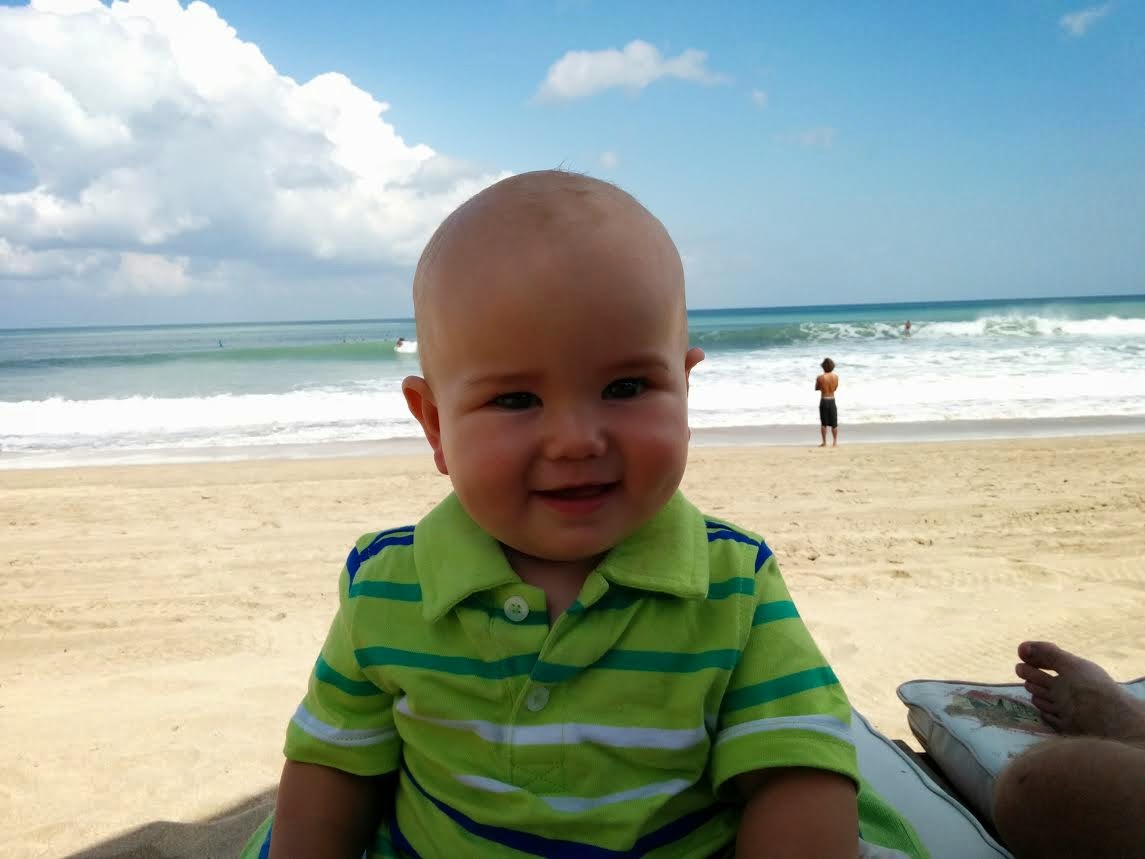