Joey woke up on the wrong side of the crib.  But, in his defense, it was not at all his fault.
My poor baby had snot running down his face and was teething with a vengeance - never in my life have I seen so much liquid coming from someones face. Poor guy!
He didn't even want to crawl around at breakfast time today. All he wanted to do was be in mommy's arms. He wouldn't even really go to daddy for most of the day.

However, we did get a little bit of a nap time after being up for a few hours, sneezing like crazy, and having his fingers shoved way into his mouth (I think maybe he's getting his molars).  We took advantage of that window of time by heading down to the beach.  I sun tanned while Stuart bobbed around in the waves among the surfers.  It was a really nice and relaxing break.

When Joey woke up from his nap, he was tired, confused, sad, plugged nosed, and drooly. We decided to have no beach time with him and just take him back to the hotel.

We did spend some really nice time together in the pool after that. Joey was super calm and just wanted to be cheek to cheek and held in the water.  Of course, I loved that time with him.
He's learning SO much SO fast I've noticed, especially on the trip.  He sees so many things happening around him here.  Motorbikes zipping by, people touching him and waving at him all the time with big smiles on their faces, dogs all over the place, the ocean, beautiful trees, kites, just all kinds of things for him to soak in.

We've noticed him getting really vocal, too.  When he see's a dog, he gets really excited and says 'duh! duh!' We think that's him saying dog.  And when he gets tired he chants 'nigh nigh nigh' and I think it's because we always say to him 'Joey, it's night night time' when he goes down to sleep.  It's pretty cute.

OH, another thing he's started doing is raising his hands and looking up with wonder.  He can do it on command now when we say "high in the sky!"

Anyway - when we got back to the room, we attempted to put Joey down for a nap.  But, with a flood of tears and him unable to nurse because his nose was so plugged up, it was an unsuccessful attempt.  We tried to let him cry, but he kept working himself up into frenzies and just needed some TLC.

Eventually, after almost two hours of trying to get Joey to sleep and comforting him with no sign of him feeling better even after a dose of Tylonal and a million tissues for his nose, I took him out in the baby carrier to do some shopping since it didn't look like he was going to be getting any sleep in his condition.

It was a good choice.  Don't get me wrong, shopping on my own would have been much easier and far less heavy.  In fact, I didn't get to do any shopping because inside of stores was stiflingly hot with no AC or fans and super pushy sales people that I was in no shape to deal with.

We just roamed around for about an hour.  Being upright was way better for Joey because it helped drain nose and he could breathe easily again, and the baby carrier gave him something to chew on.

After an hour or so of walking with Joey in and out of the carrier, I needed desperately to take a load off and stopped in Seminyak at a cool little Spanish coffee shop.  I had a latte, fed Joey (he finally could eat because his nose wasn't plugged as badly!), and had a long visit with the shops owner, who was from Spain but had been living in Bali for the past ten years.  We talked about all kinds of things, including the condition of people in Bali and the lack of any health care for them on account of most people getting paid cents a day and proper medical care being only aimed at expats and tourists.  She said most people will know that they're sick and have no idea what they have.

I asked her about women giving birth and if there are midwives.  She told me that there are no midwives, but people go to certain places where there are women to support them while giving birth.  They are not trained at all.  It's a different world.

We talked for so long that she got the chef to make me some banana fritters and gave me some ice cold water (not usually something freely acquired as Bali's tap water is undrinkable), so I happily stuck around and ordered an espresso while Joey looked mesmerized at the fan and played peek-a-boo with one of the servers.

We said our goodbyes after about an hour long visit, and Joey and I headed through a narrow alleyway that had a small sign spray painted 'beach access'.  It was a long and tight alley with high walls - definitely not for the claustrophobic.  But, true to the sign, though it seemed as though we'd never reach it, it was a beach access alley and after a maze of twists, turns, and almost being run over by motorbikes, we made it.

We walked along the beach as the sun was setting and I hopped Joey out of the carrier because the tide was low and I thought he might like to walk holding my hands through the watery sand.  We had a nice little ten minute walk time until he got so tired the he almost collapsed into the sand.  Our walk back was beautiful.

Back at the hotel, I fed Joey and plunked him down into the pack 'n' play in the bathroom and went back out to get us some mie goering and samosas for dinner.  We ate dinner on the hotel floor.  It wasn't exactly the night I was envisioning, but I was so thankful that Joey was finally sleeping that I didn't care.

After dinner, Stuart went to the corner store and got us some magnum bars to eat during Battlestar Galactica. Joey woke up once and I gave him some more tylonal. Hopefully he sleeps well tonight and is back to his fun loving self tomorrow morning.

I still can't get the SD card to work on the computer (and neither can Stuart, so I'm not completely illiterate), but here are a couple pictures from Stuarts phone from today.

The Sleepiest Baby in Town 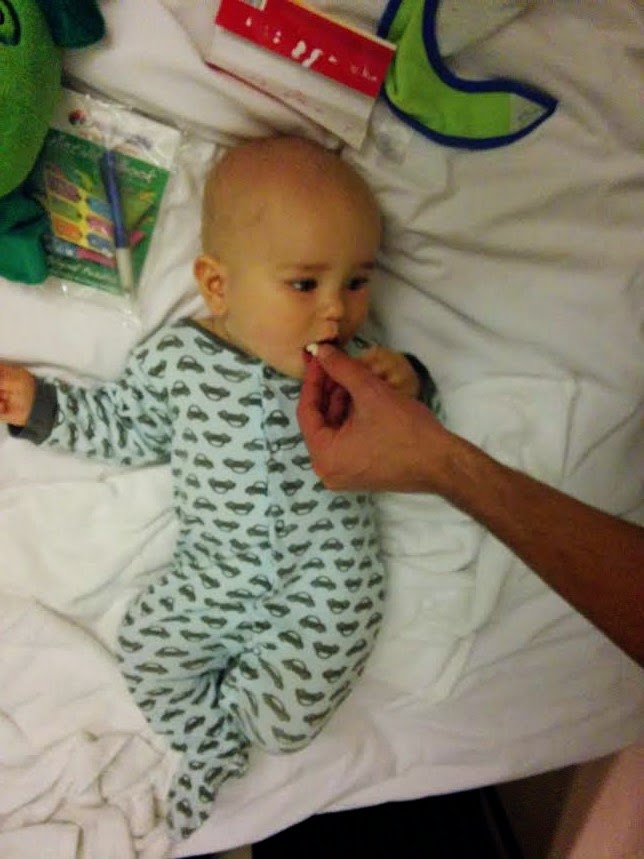 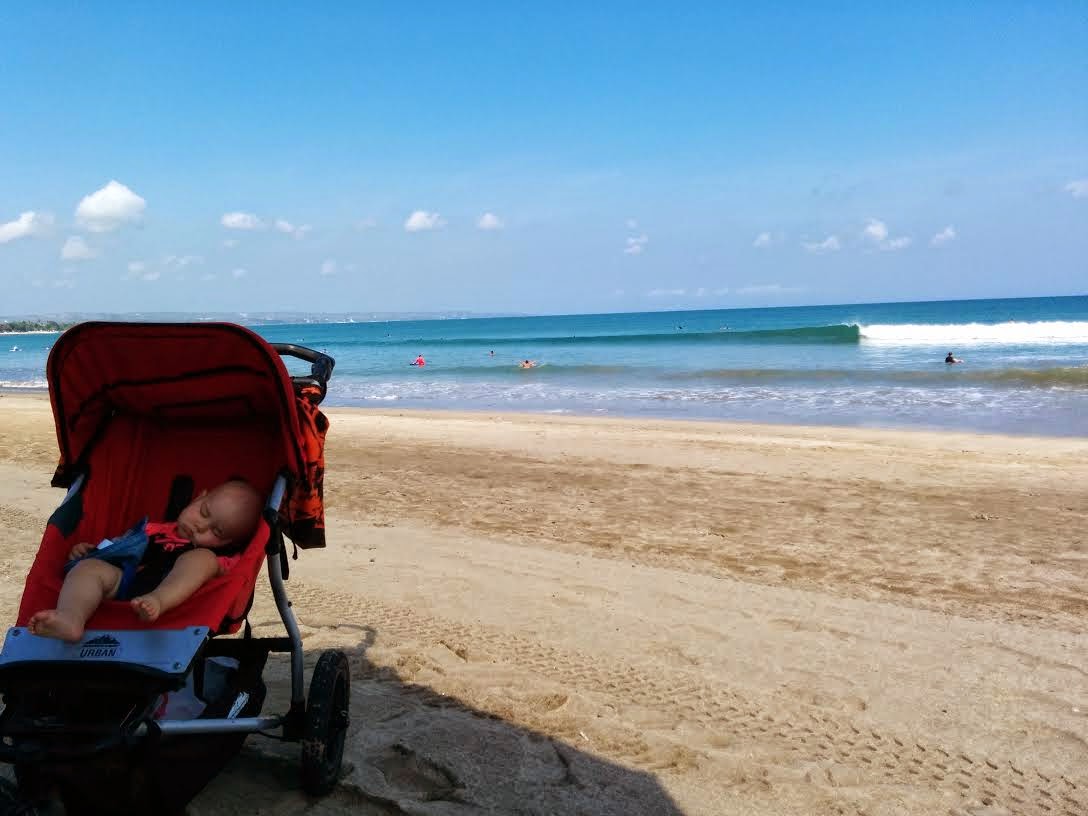